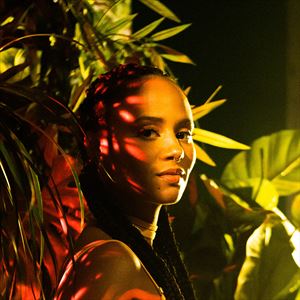 Please note the booking fee for this event includes a Levy of £0.40 which is charged by the venue

14+ only. 14s to 16s must be accompanied by an adult. No refunds will be given for incorrectly booked tickets.

Mayra’s singing is a blend of radiant, dancing colors, velvet beats and spicy melodies. Her voice is subtly seasoned with pepper, as if the Europe of pop had always been a tropical archipelago. The songs conjure up an eternal summer that disperses the mists and chills, but never resort to the tinsel of exoticism. Sung in Cape Verdean creole, English and Portuguese, they carry us away in their warm, adventurous unpredictability. Mayra’s pop spans the world’s entire vast sweep from Western romanticism to Southern sensuality, and domestic reggae to African 3/4 time. It is topical, tropical, traveling pop. Her aim was simply to make 'music that reflected my life'.

And her life has been very colorful. Her father fought for Cape-Verdean independence, a struggle supported by Cuba. When there were fears for his wife’s health during pregnancy, she left to have her child in the 'brother country'. So Mayra was born in Havana. She spent her early childhood in Praia, Cape Verde. Then, at the age of six, she went with her mother and diplomat stepfather to Senegal, Angola and Germany. When she returned to Cape Verde at the age of forteen, she began to sing and won a gold medal at the 2001 Francophone Games contest in Ottawa.