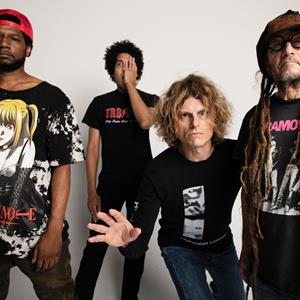 OFF!
All Off! performances

Some things in punk rock are eternal, like the raw and snarling sound of the original SoCal hardcore scene that birthed Black Flag and the Circle Jerks. Singer Keith Morris was a founding member of both uncompromising acts, but his most unexpected feat has been his latest chapter, operating at peak rage and inspiration for a new millennium as frontman to the hardcore supergroup OFF!
Beginning in 2010, the explosive quartet released three highly acclaimed albums on Vice Records and delivered a modern take on the original blueprint of first-wave hardcore to fans around the world. Songs written by Morris and guitarist-producer Dimitri Coats (Burning Brides) are blunt and brutal takes on modern life, fueled on wild downstroke guitar riffs and a dreadlocked singer permanently pissed.
Now, in 2022, OFF! is back for another round of frantic beats and nervous breakdowns, with a full schedule of projects in motion, including the release of the band's first new studio album in eight years and a long-planned sci-fi feature film. Joining OFF! on that mission is a powerful new rhythm section: bassist Autry Fulbright II (.And You Will Know Us by the Trail of Dead) and drummer Justin Brown (Thundercat, Herbie Hancock).