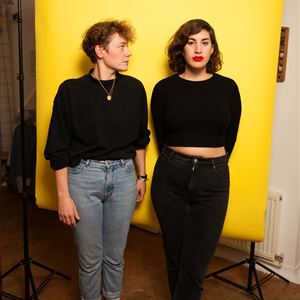 Please note the booking fee for this event includes a Venue Levy of £0.50 which is charged by the venue

'Slow Fade' is the first single from Peggy Sue's upcoming fourth album. After a three year break - during which Rosa Slade and Katy Young have been performing with all-female singing group Deep Throat Choir - 'Slow Fade' is an apt comeback; a melancholy celebration of patience. It is a dreamy breakup song, one that let's you hang around lazily in the days when you aren't ok yet.

The single - and upcoming album- borrow in equal parts from the perfectly-constructed pop songs of the 1960s and   the understated, noisey guitar experiments of 90s indie bands such as The Breeders and Blur. The new material sees front-women Slade and Young joined by Dan Blackett (Landshapes) on drums and Benjamin Gregory (GRIP TIGHT) on bass who bring a fresh energy and clarity to the band's enduringly captivating duel vocals.